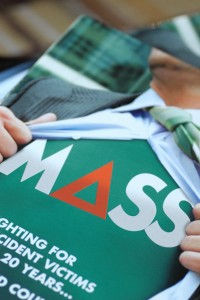 Bringing justice to the victims of road traffic accidents is what MASS is about. One of our key objectives is to preserve your fundamental right to access to justice through lobbying Government and campaigning.

If you have suffered an injury from a road traffic accident we would always strongly advise that you contact a solicitor for advice and assistance in making a claim. However, if your claim is found to be worth less than £1,000, it will be dealt with under what-is-called the ‘small claims track’ which means you must either pay the full amount for legal advice or handle the claim yourself.

The Government may soon be introducing new laws that will increase the limit to £5,000. This will mean that approximately 80-90% of road traffic accident victims will have to either handle the claim themselves as a ‘self-litigant’ (also referred to as a ‘Litigant in Person’) and be up against a large insurance company and their solicitor or pay the full cost for a solicitor to represent them.

MASS believes this is totally unfair and unjust, and we are fighting hard to ensure that the accident victim retains their rights to access justice and independent legal advice.

Anyone who has experienced a whiplash injury knows how painful and debilitating it can be. There are, unfortunately, some people who believe that whiplash is not a genuine injury and that you should not be able to make a claim.

Consequently, the Government has passed a new law that next year will introduce a new process where victims will have to run their own claim through an on-line portal. claimants will receive significantly less compensation for their whiplash injury.
MASS believes this is completely wrong and is continuing to campaign to ensure that victims are not disadvantaged.

The Motor Insurers’ Bureau estimates that there are over 1 million cars on the road in England and Wales that are not insured, which significantly adds to the cost of motor insurance for the 20 million households who do have a policy.

MASS has been campaigning for many years for a ‘zero tolerance’ approach, with much tougher penalties for those who are found to be driving without insurance.

We are continuing to work with the Government and insurance industry to help reduce the number of uninsured drivers on our roads and will continue to fight for more stringent penalties and improved ways of identifying and combating this unacceptable behaviour.

Following an accident that was not your fault, the insurance company of the person who hit you (the defendant) may contact you direct and offer to settle your claim. They often say that by dealing direct with them and by not having your own solicitor, your claim will be settled quicker and will not cost you anything. In our experience this is not the case as you will invariably receive less than the full amount of compensation that you would otherwise be entitled to, especially if you have an injury.

This practice is not regulated, which opens the door for potential abuse and makes it more difficult for you to get full redress if something goes wrong. MASS continues to campaign for this practice to be banned.

We strongly advise that you do not deal directly with the defendant’s insurer, but always seek independent legal advice, no matter how straight forward your claim may at first appear to be.